Which Oil is Right for an engine of my Mercedes?

What are the Mercedes-Benz recommendations for engine oil?
The engine oil is a very important element in the life and function of the engine, as it reduces wear on moving part. In addition, it cleans the engine alle-dæk.dk, inhibits corrosion, improves sealing, contributes to the lowering of the fuel consumption and also helps to cool the engine, by carrying the heat away from the moving parts.

The best engine oil for each Mercedes-Benz model is specified in the owner`s manual, but there are some general guidelines to be followed. Mercedes Benz usually recommends the use of fully synthetic oils rather than natural ones. And, naturally, the best option is to use a Mercedes-Benz Engine Oil.
Depending on the specifications of your car, there are different types of MB Engine Oil that you can use. Here you can see the specifications required for each and every type of Mercedes Benz engine: http://bevo.mercedes-benz.com/d/d/en/Spec_223_2.pdf.
After you know which specifications to look after, you can find different types of engine fuel that are appropriate for it, by accessing that specification page on this site: http://bevo.mercedes-benz.com/bevolisten/bevo-sheets-sort1.html.
For example, if your car has an M 132, M 266, or M 271 engine, it requires a 229.31 specification, therefore you can use the MB 229.31 MotorenÃ¶l A 000 989 89 01 Opal or the MB 229.31 MotorenÃ¶l A 000 989 93 01. read more

What are the main differences between engine types?
But choosing the best engine oil for your car is not easy, especially if you don`t understand how its engine works. Therefore, it is important to know the differences between different types of engines, such as gasoline, diesel or turbo engines, and which cars they are found in. 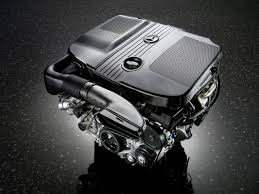 r other similar volatile fluids. In the majority of petrol engines, the fuel and air are mixed together before compression. This pre-mixing was formerly achieved with the help of a carburetor, but in modern, bigger cars it is done by electronically controlled fuel injection. After mixing the air and fuel together, the gasoline engine uses spark plugs to initiate the combustion process. The gasoline engine can be currently found in automobiles, motorcycles, motorboats, but also lawn mowers or chainsaws.
The diesel or compression-ignition engine is also an internal combustion engine, but in its case, unlike the gasoline engine, only the air is compressed and therefore heated, causing the ignition of the fuel that has been injected into the combustion chamber. In diesel engines, glow plugs or combustion chamber pre-warmers are sometimes used to help the ignition process in cold weather or when the engine uses a lower compression ratio or both. Diesel engines have been used in bigger cars for a long time, but their use in smaller city cars has increased since the 1980s. Diesel engine powered cars are usually more economical at regular driving speeds, more reliable and are considered to generate less carbon dioxide than gasoline engines.
A turbo engine is either a diesel or gasoline engine that uses a turbocharger. This turbocharger is aimed at increasing the efficiency of the internal combustion engine by forcing extra air into the combustion chamber. The turbocharger is currently common in both petrol or diesel-powered cars and it is used due to its ability to increase the car’s power, lower the fuel consumption and increase the general efficiency of the engine.
The turbocharger is also used for motorcycles, trucks and even aircraft at resources.

Which are other engine oil brands approved by Mercedes-Benz?

Once you know what kind of engine your car uses, it is easier to find the appropriate engine oil.
If the MB Engine Oil is not available or it is too expensive in your country, there are other approved oils, such as Mobil 1.
These oils circulate more easily than mineral oils around the engine, so it makes it operate more efficiently. The fact that synthetic fuels also work faster helps the engine reach its peak efficiency quicker, thus improving the efficiency of the fuel and, therefore, saving money.

Most newer recent diesel with gasoline powered passenger Mercedes Benz cars use Mobil 1â„¢ ESP 0W-40, a fully synthetic engine oil that provides exceptional protection against engine wear, under normal or even the most extreme conditions. This engine oil is suitable for all cars that require the Mercedes-Benz MB 229.31 or MB 229.51 specification.
However, for the high-performance petrol along with diesel engines that are originate in the most modern fare cars, SUVs and light vans, a better oil option is Mobil 1â„¢ ESP Formula 5W-30, fully synthetic oil with low ash content and low oil consumption, which aids fuel economy and generates less hydrocarbon pollution. This oil also has the Mercedes-Benz Approval for the MB 229.31 and MB 229.51 specifications.
If your car requires the Mercedes-Benz MB 229.3 or MB 229.5 specification, you can opt for Mobil 1 New Lifeâ„¢ 0W-40, a synthetic oil that is suitable for the latest engine technologies including Turbo-chargers, Direct Injection, Diesels and Hybrids High-Performance Engines.
On the official site with Mercedes-Benz Specifications for Operating Fluids, you will also find a list with all the other engine oils that are approved by Mercedes-Benz, as well as their manufacturer.
But in order to make sure that you are using the best engine oil for your car, you should consider checking your car`s manual or the official specifications for operating fluids in passenger cars: http://bevo.mercedes-benz.com/d/d/en/Spec_223_2.pdf.
Another general rule of the thumb when using another oil than the Mercedes-Benz Engine Oil is to always choose products that are marked with the label “MB-Approval”, which indicates that they are officially approved by Mercedes-Benz. Labels that only contain MB and the specification (for example, “MB229.31”) are not approved by Mercedes-Benz for use with their cars.
If you find it difficult to choose the best oil for your care, there are also websites that will indicate it to you, after you provide them with the model of your car. There are also forums dedicated to Mercedes Benz owners, where you can find out more information about the approved engine oils. And, if neither of these methods works, you can always contact an official Mercedes-Benz dealership that will provide you with the answer.